The 2016 30th Golden Disk Awards have come to a close after two days with the biggest winner of the night being EXO whom took home the all important “Album of the Year” award for their album EXODUS, like their win at the Seoul Music Awards, EXO are now the first group to take home the Album of the Year award for three consecutive years. The boys also won a Bonsang and Most Popular Global Artist however all these wins does not erase the fact that they turned up to the red carpet in possibly their worst outfits since their debut (which you can see below). Tonight the event was MC’d by Jun Hyun Moo, Super Juniors Leeteuk and F(x)’s Krystal whom replaced leader Victoria who couldn’t make the awards. SM took home the most awards for the night with four of their six active groups all taking home a Bonsang (although Red Velvet and SNSD received Bonsang’s from Day 1) so technically all of SM’s active groups won a Bonsang at this years Golden Disk Awards. 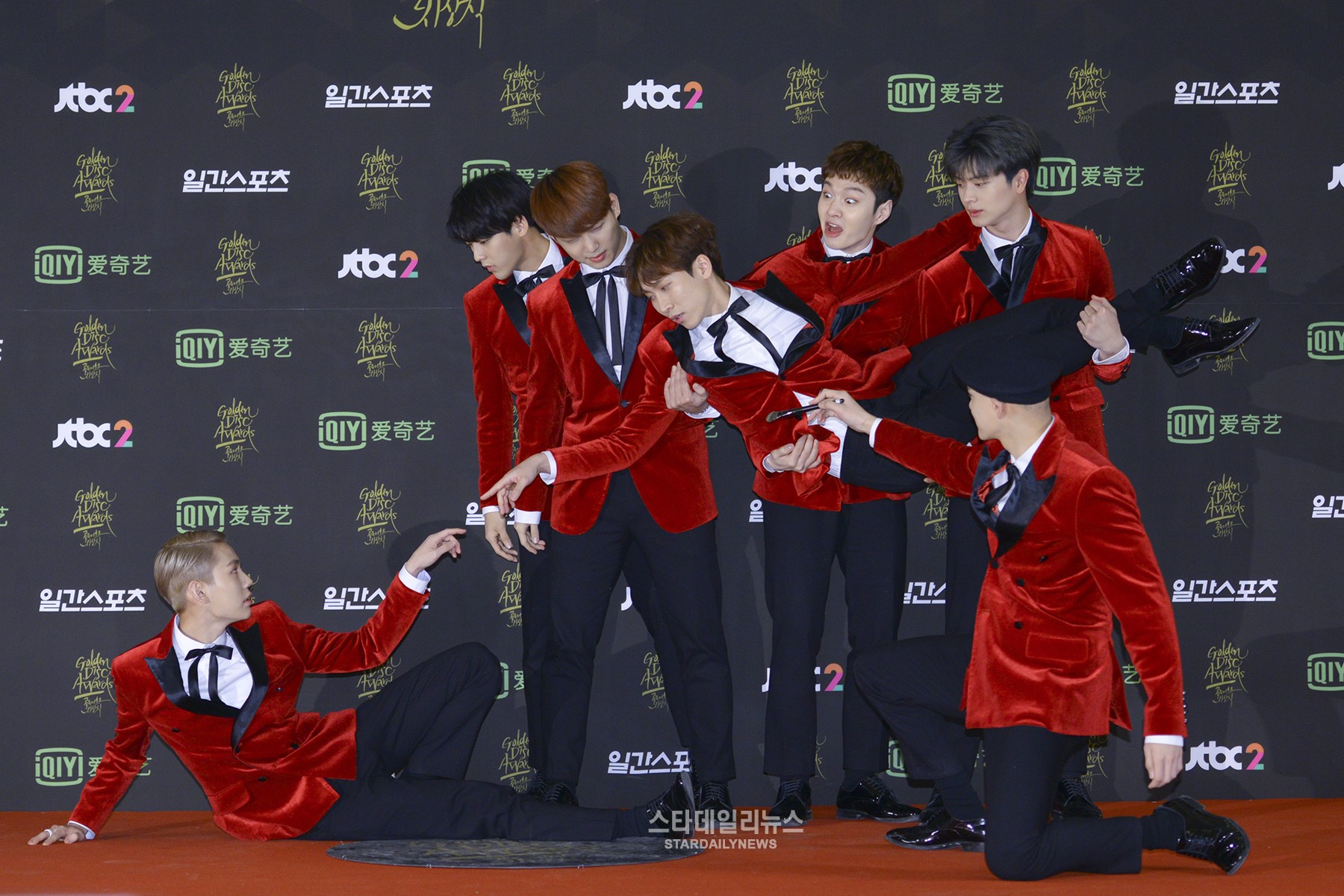 Day 2’s red carpet looks were a lot more interesting than Day 1’s with more groups in attendance, however there were more male groups than female groups walking the red carpet. The two female groups however couldn’t be more different in styling for the night with APink looking like more younger and richer looking librarians with their heavier clothes, meanwhile rookie group Twice rocked shiny latex mini skirts, black Doc Martens and various black crop tops (those poor girls must have been freezing in those outfits). As for the guys, BTOB were wearing crimson red velvet jackets which actually looked ok the guys then later posed themselves like Michelangelo’s “The Creation of Adam” painting which was seriously awesome. EXO were styled by Louis Vuitton and honestly as a fan of them this is their worst red carpet look since their big comeback with Wolf in 2013, half the boys are wearing the wrong size pants and then they all look like sleazy loan sharks in the making with their silk shirts, BTS mimed having herniated disks during their press photos because you know it’s the Golden Disk Awards and rookie group Seventeen looked adorable in their bow ties and suits of varying shades of blue minus one member who didn’t seem to get the blue suit memo. Meanwhile both CNBLUE and SHINee were missing a member. 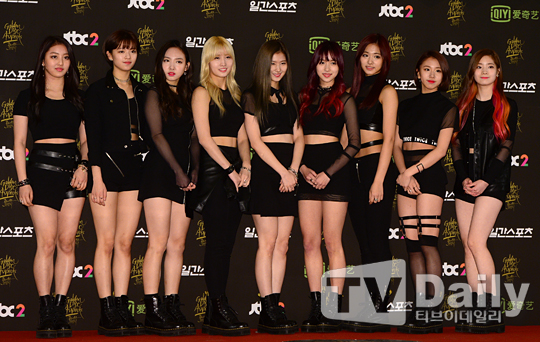 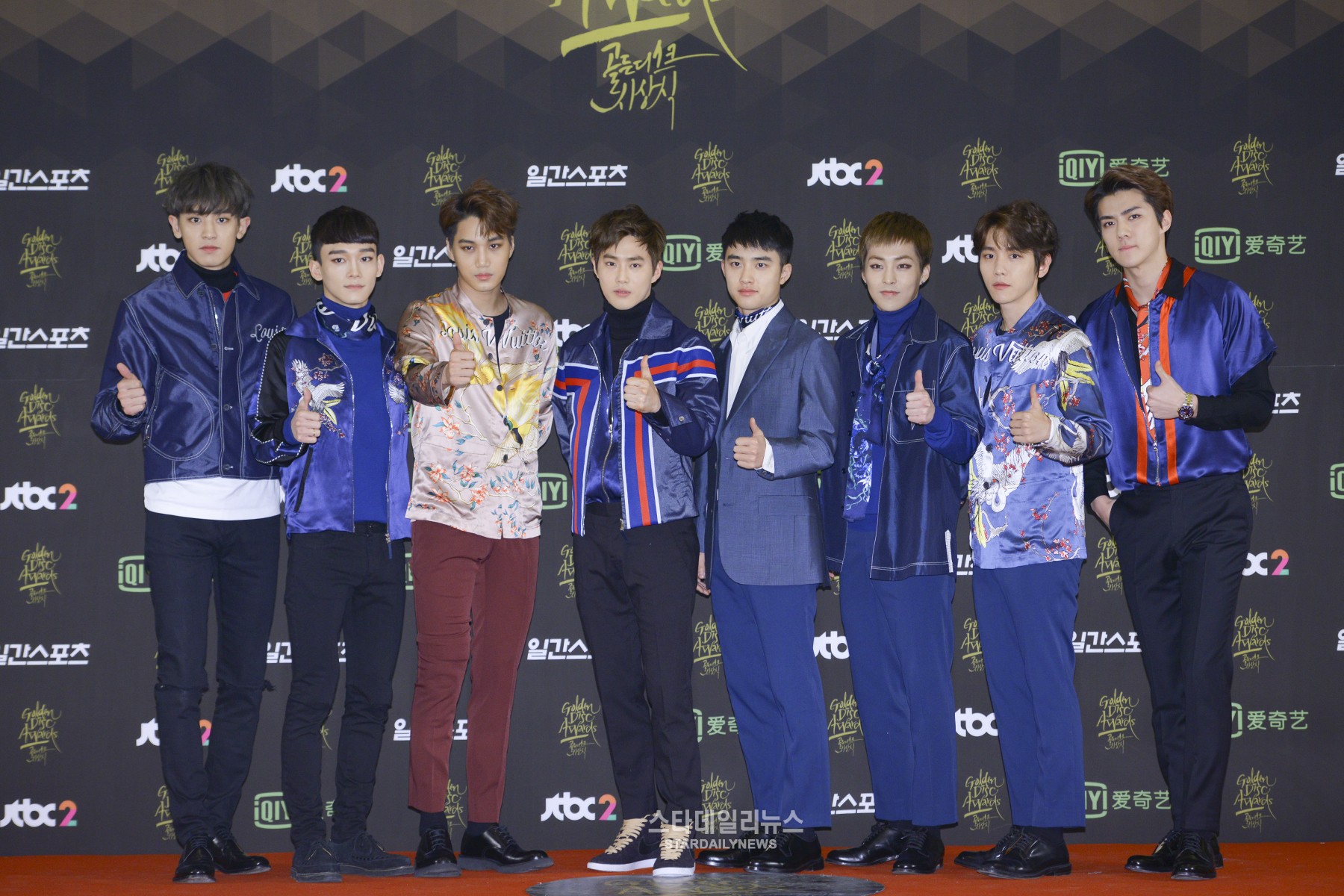 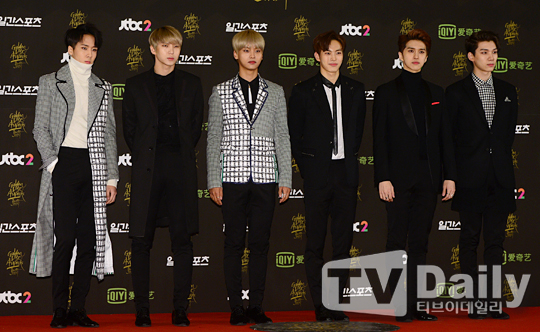 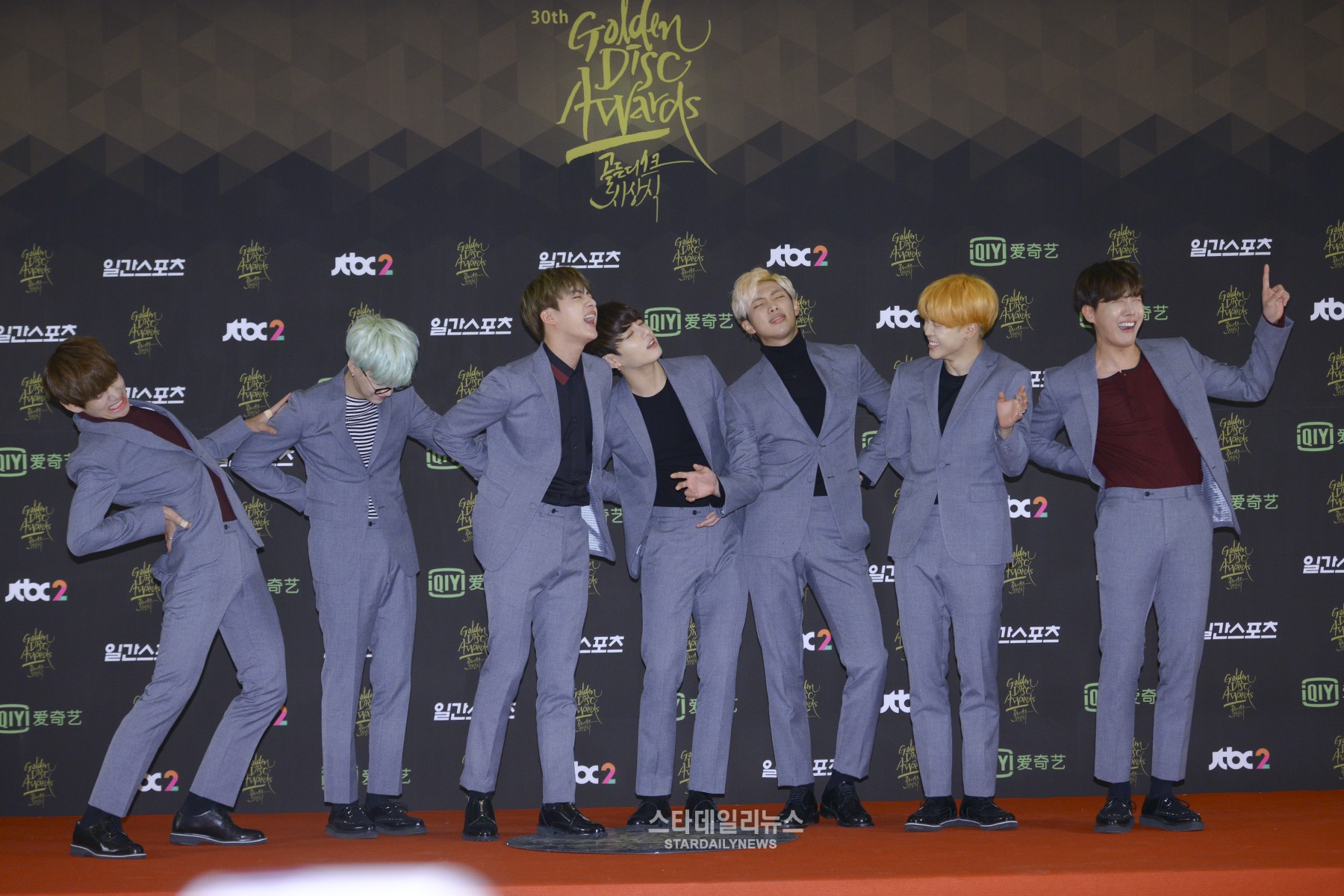 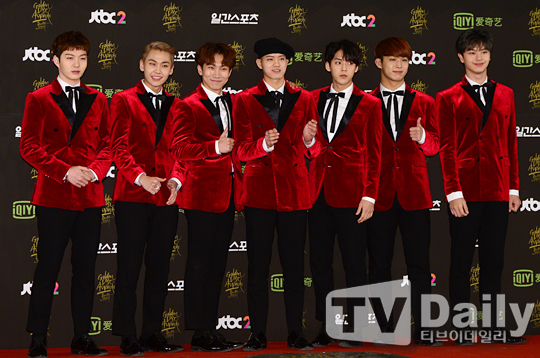 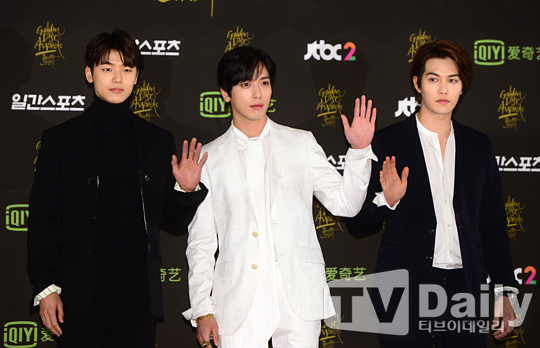 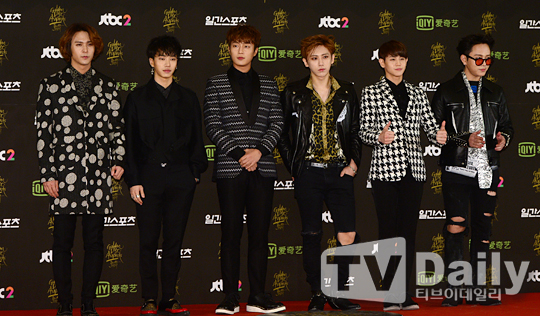 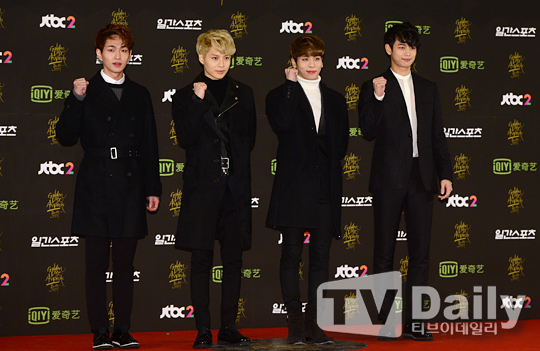 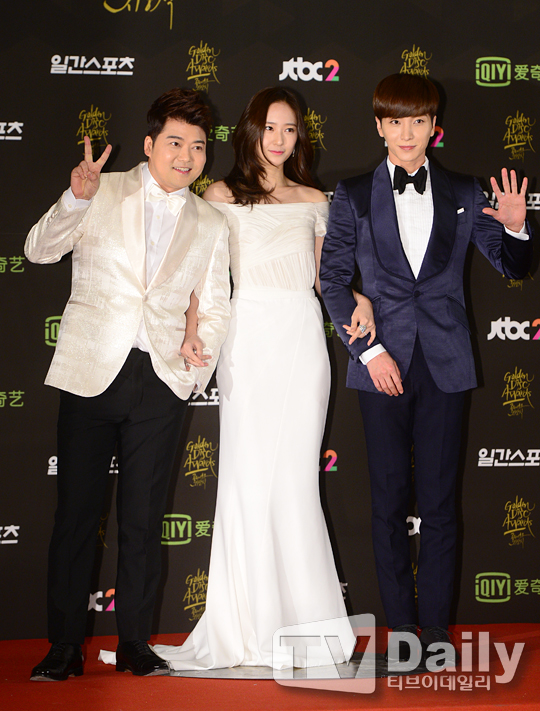 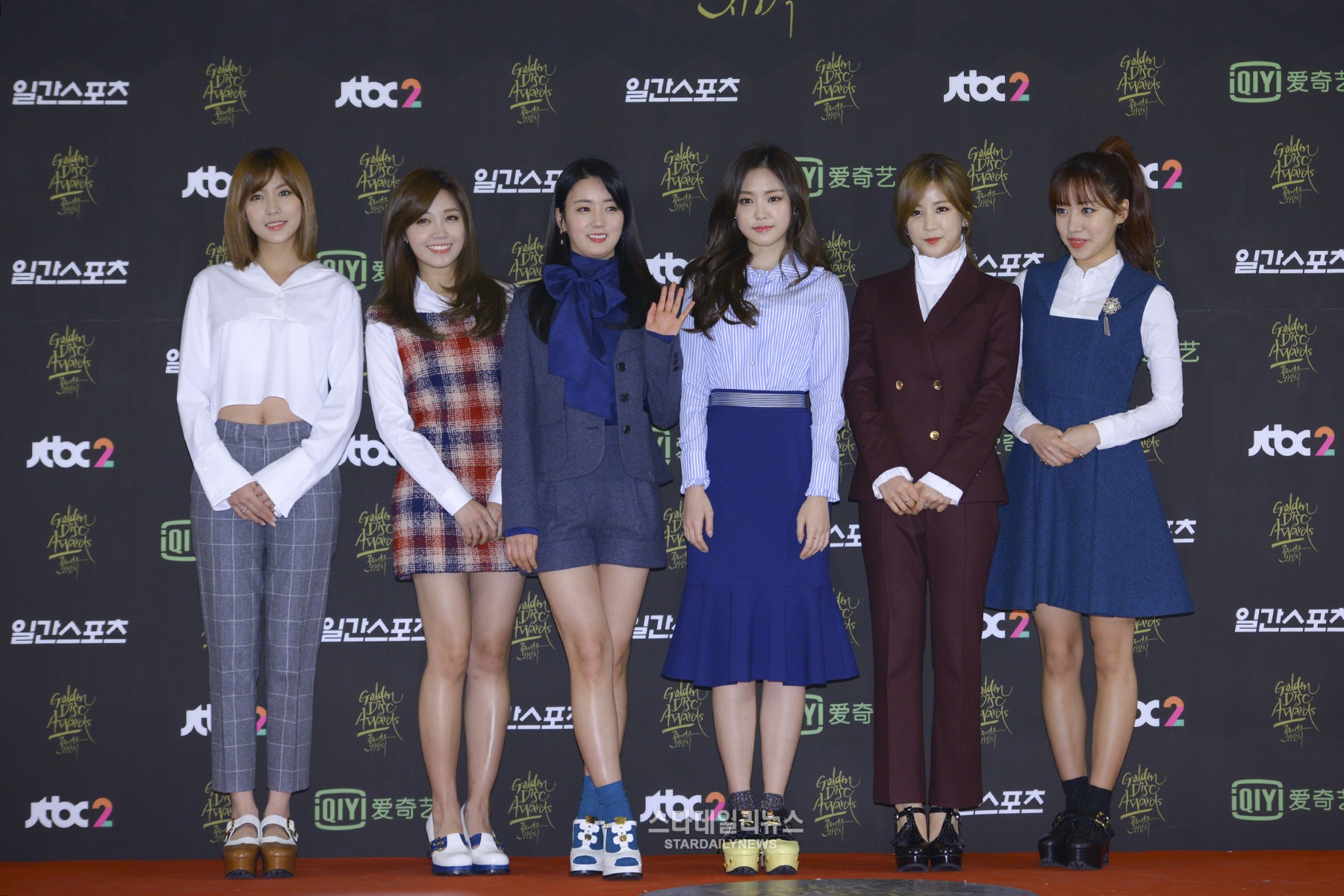 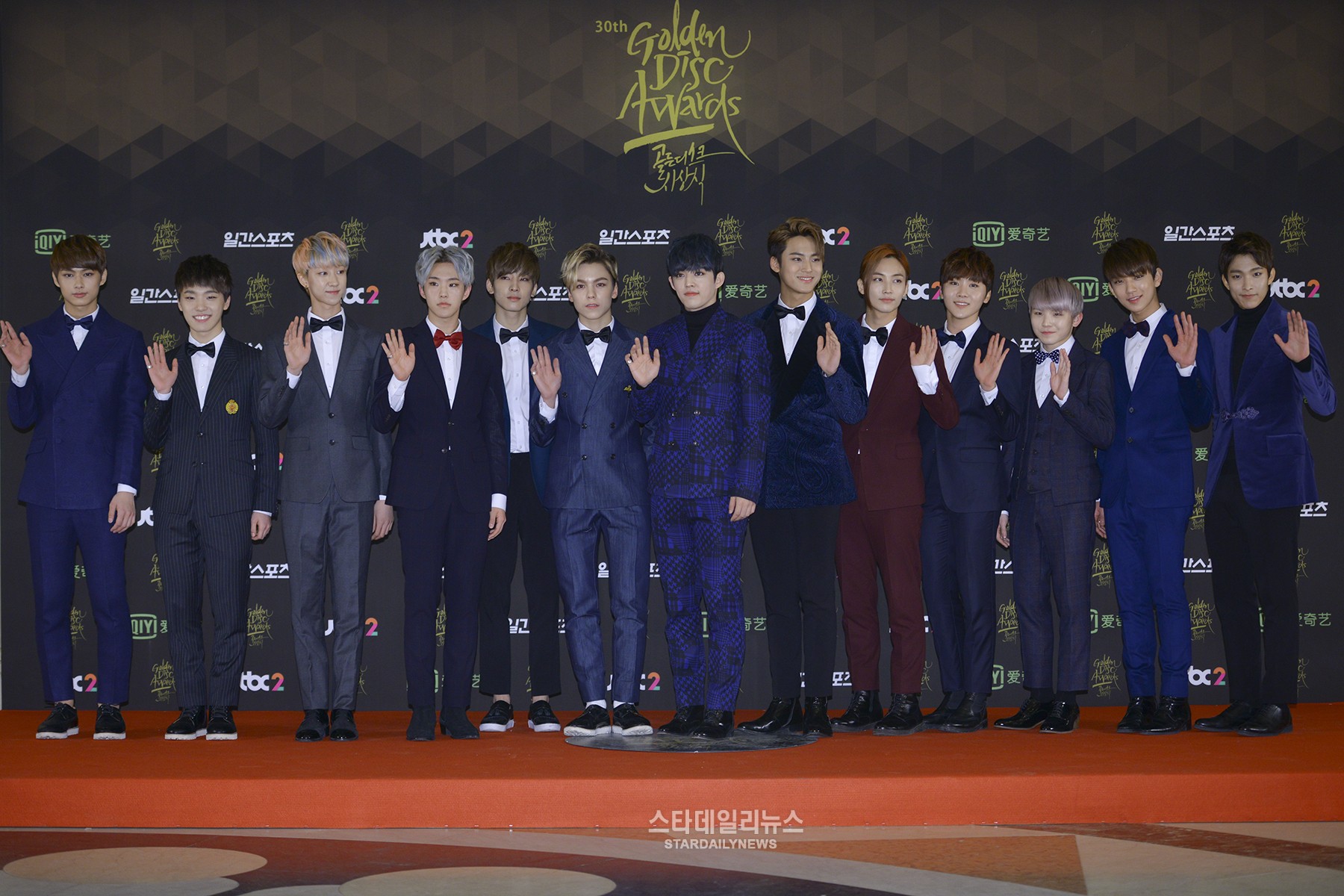 EXO performed their latest song “Sing For You” as well as “Love Me Right” and members Suho, D.O and Baekhyun also sang “My Answer” which is off their second album EXODUS. Concept-idols VIXX performed their songs “Chained Up” and “Error” before vocalists Leo and Ken joined BTOB’s Eunkwang and Changsub for a special stage where they performed Brown Eyed Soul’s “My Everything“, the boys of BTOB also performed their songs “Way Back Home” and “It’s Okay“. Rookie group TWICE performed their debut song “Like Ooh Ahh” and also had a special dance stage, meanwhile BTS performed “I Need U” off their mini album The Most Beautiful Moment in Life: Part 1 as well as dance track “Dope” off the same album. F(x) meanwhile performed “4 Walls” minus leader Victoria and Amber also performed her solo debut song “Shake That Brass“.

Check the nights performances below.